(The Publisher For Accumulated Literature)

My new project is called "Regnfødt" (Rainborn). The plan is that it should be a two Lp set (hardbox) containing liner notes, pictures, sheet music and some prints of paintings. Below you can hear some of my demos and ideas of the music.

Here is "Bladflugt" for prepared guitar. "Bladflugt" is a song where I return to an old piece of melody I wrote several years ago. It is the "yellow" folk tune that clashes with the "blue" blues on an autumn day in October. It is played in c with capo on the 3rd fret. The guitar is tuned in D, A, D, G, A, E with plastic over the strings.

Here is "Grassfoot" for guitar and mouth harp. An old piece of melody returns from oblivion and sticks memorably on my fingertips. It is played in D with capo in the 3rd freet. The guitar is tuned in D, A, D, G, H, E

Here is "Egisah's Waltz". A new number based on the rolling a three-quarters beat. A number in motion. In constant motion. Like cycling out into the countryside one summer morning south of Brabrand lake with the clouds above that quietly pass by on silent toes. The name "Egisahs Vals" comes from the first notes in the melody that naturally intertwine in the groove of the basic pulse. I draw a lot on the English and Scottish guitar tradition with a reference to the Andalusian flamingo (Am, G, F, Em) and not least Davy Graham's "Angi", which Bert Jansch later immortalized by playing it, "as he thought it was to be played ”. This is the first time I have recorded anything with my newly acquired guitar. It's a 00-15M Martin (I think so), but at least I'm happy with it. It has a clear slightly closed nice sound, it is small, light, narrow fingerboard, and then it is brown. I like brown. The waltz is played in Hm and the guitar is tuned in standard tuning with capo in the 2nd fret.

Birds of the morning (MP3)

With the window open in seeps the early morning gull. Beep and sun-black chirps sounds so nice in the hollow empty streets. Finally I can hear what is being said. There are tones in trees and on the bricks. On the outermost ridge sits the smallest bird and enjoys its own timbre. It is now we can tune to the song of the city bird. EADGAE it is the birds in the morning with capo in 3rd fret.

"Tar Gui" is out in stores, Rillbar (CPH), bandcamp and on

code for the album (with 3 bonus outtakes). 12 pages booklet & 3 pages

tabulatur. With 2 tracks only on vinyl. Printet i 300 copies. Most of the

music is recorded in my good friend Torbens house in the first half of 2019.

"A regular masterpiece that in its own soothing way

emphasizes the music's own primordial power - and

the talent that Martin Kirkegaard obviously has as one of

and especially those who do not want to waste their time on superfluous coincidence.

One of this year's albums - across genres".

"....this album of music emphasising the acoustic instruments and hands that made it will take plenty of time to truly discover and will reward each listen. A beautiful album from a very generous musician".

A track that also appeares on the album in a studioversion. 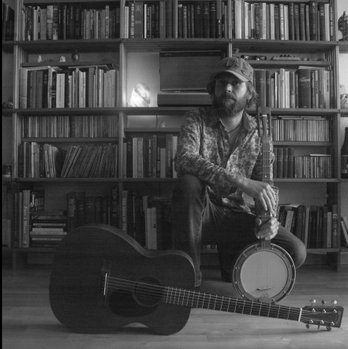